Leonardo Da Vinci wrote a manuscript titled the Codex Leicester. Bill Gates bought the manuscript for $30.8 million in 1994, making it the most valuable manuscript in the world. So, I asked myself why would Bill Gates,  who's at work reinventing the nuclear reactor, trying to eradicate malaria in the world and inventing toilets to prevent diseases, be so interested in a 500-year-old journal?
Here is his anwer:
"It's an inspiration that one person--off on their own, with no feedback, without being told what was right or wrong--that he kept pushing himself," Gates says, "that he found knowledge itself to be the most beautiful thing." 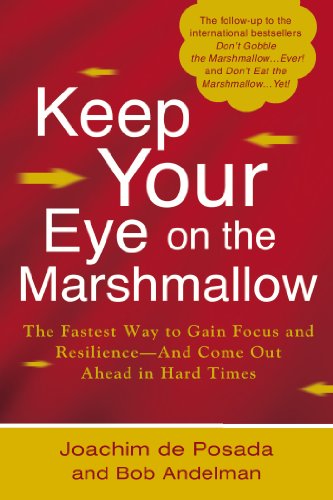 Order 'Keep Your Eye on the Marshmallow: Gain Focus and Resilience-And Come Out Ahead' by Joachim de Posada and Bob Andelman, by clicking on the book cover above!

Named in 2009 one of the 25 Hot Speakers in the United States who are shaping the speaking profession according to Professionally Speaking, the National Speakers Association magazine. One of only three Hispanic speakers with the Certified Professional Speaker designation from the National Speakers Association, the highest earned designation in the speaking profession. Awarded Most Distinguished Hispanic Speaker in the United States in 2007 at the US Hispanic Chamber of Commerce Convention in San Juan, P.R. Speaker at TED U. in February 2009, his session posted at www.ted.com is approaching 1 million views.
"Posada is like Tony Robbins, Zig Ziglar and Norman Vincent Peale all rolled in one ... and he does it in two languages!" -- Ray Pelletier Dr. Joachim de Posada is an internationally renown motivational speaker and author with offices in San Juan, Puerto Rico, and Miami, Florida, who is fluent in English and Spanish. He specializes in leadership, management, team building and consultative sales. He has spoken in more than sixty countries and the United States. He is a former adjunct professor at the University of Miami (1988-2008) where he taught Leadership, Psychology Applied to Sales, Negotiating Skills and Time Management. His client list has included Exxon/Mobile, Merck, Verizon, Baxter, BBVA, the US National Guard, Sprint, Amadeus, American Airlines, and many more. His motivational methods have been so successful that they have been transferred to the sports world. In the past he has been a consultant in Sports Psychology for the NBA's Milwaukee Bucks, the Los Angeles Lakers and The New Jersey Nets as well as Puerto Rican Professional teams and Olympic teams, motivating the players to achieve higher levels of performance. This combination of Academia, Corporate, and Sports has given Joachim a unique perspective in putting proven principles to work to motivate and inspire people to new levels of excellence. This blend of experiences is guaranteed to have four synergistic effects on your business: 1. Increase sales 2. Raise Productivity 3. Empower Managers to Coach 4. Inspire a winning team 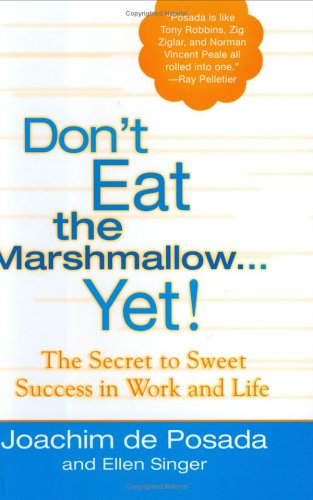 Order 'Don't Eat The Marshmallow Yet!: The Secret to Sweet Success in Work and Life' by Joachim de Posada, available by clicking on the book cover above!

de Posada is the main author of several books, including Don’t Eat the Marshmallow…Yet: The Secret to Sweet Success in Work and in Life, named the best book of the month by the New York Times and published by Penguin. This book has been translated into twenty languages and it is now an international best seller having sold more than 3 million copies since its publication in 2005. 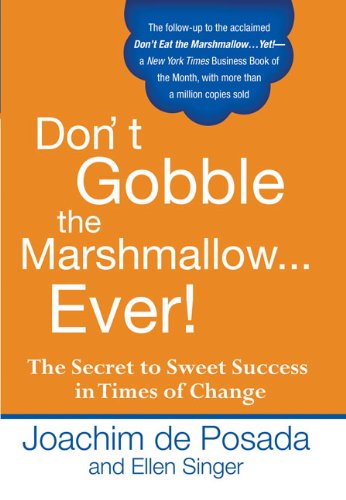 Order 'Don't Gobble the Marshmallow...Ever!: The Secret to Sweet Success in Times of Change' by Joachim de Posada, available by clicking on the book cover above!

Don’t Gobble the Marshmallow… Ever: The Secret to Sweet Success in Times of Change, the first sequel, was published in 2007 and sold more than 500,000 copies.

Order 'Keep Your Eye on the Marshmallow: Gain Focus and Resilience-And Come Out Ahead' by Joachim de Posada and Bob Andelman, by clicking on the book cover above!

The third book in the series, Keep Your Eye on the Marshmallow: The Fastest Way to Gain Focus and Resilience--And Come Out Ahead in Hard Times, was published in 2013. 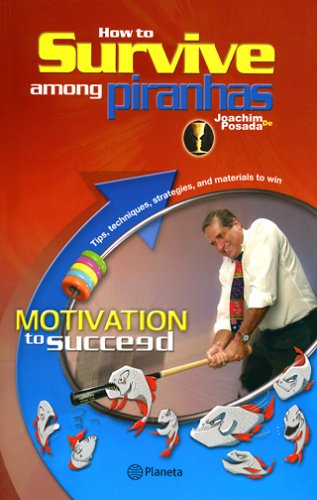 Order 'How to Survive Among Piranhas: Motivation to Succeed' by Joachim de Posada, available by clicking on the book cover above!

His other successful book is How to Survive among Piranhas: Motivation to Succeed, a best seller in Latin America and in Korea. Presently, he has a daily motivational capsule three times a day in WOSO, the only commercial English Radio Station in San Juan, Puerto Rico and is a regular guest in television programs and has appeared in CNN, Despierta America, NBC morning show, El Show de Ruben Sanchez, El Show de Fernando Hidalgo, A Mano limpia and many others. He is the President of the Florida Speakers Association, served as director on the board of the National Speakers Association for the year 2008-2009 and is now the President of the Latin America Speakers Association. He spoke at the TED Conference in 2009 and 2010. A video of his presentation, which can be seen at http://bit.ly/14f86JR, has had more than 850,000 hits, one of the most popular in TED’s history. de Posada is a member of the National Speakers Association, the American Society of Journalists and Authors, the American Psychotherapy Association, the International Management Consultants Association, Rotary and Kiwanis Club. FOR A COMPLETE LIST OF CLIENTS, PLEASE VISIT http://www.joachimdeposada.com